"We rolled out 1200 Chromebooks to classrooms and CACHEBOX means that we haven't needed to increase our bandwidth."
Rodney Leer, Brenham Independent School District, USA "Our bandwidth problems have been practically eliminated. Monitoring & customization is a snap with the web interface."
Desert Academy, Santa Fe, USA "ApplianSys is the only vendor that takes the time to look at our appliances for us, and it really goes a long way."
Mike Caruso, Orland Park Consolidated High School District 230, USA "Even un-cacheable content can be accessed faster due to the bandwidth saved by serving part of our traffic from CACHEBOX."
Jon van der Raadt, Connect Charter School (Calgary Science School), Canada "We knew caching was one of the best ways to differentiate from our competitors, we just needed a new, cost-effective, solution"
Gregory Eid, Managing Director at Teledata ICT, Ghana

For some time, HIS had been contending with increasing demand placed on limited, expensive bandwidth. Teachers and students needed fast, reliable access to the internet to communicate, collaborate and carry out research.

With a 1:1 scheme (the provision of 1 device per student and teacher) in the process of being deployed, the school’s ICT team identified the need to optimise bandwidth usage.

Harare International School (HIS) caters to 550 students from around the world. An elementary, secondary and high school share a custom built campus in Zimbabwe’s capital.

ICT Director Jeff Klancke described the situation: “we were getting ready to deploy a 1:1 iPad programme and our bandwidth budget was fixed for the year. I needed to make sure that we could support these additional devices and still deliver a solid web experience for teachers and students.”

Bandwidth usage at HIS ranges from light general browsing, email and document sharing to downloading video and other large objects during lessons. “A lot of our traffic was from group-based lessons – this meant lots of students accessing exactly the same content. We were constantly downloading duplicate data,” explained Jeff.

This resulted in poor internet performance at peak times and created extra work for the ITC department as teachers raised faults related to ‘connection timeout’ messages.

An 8Mbps connection costs over $6,000 per month, so simply increasing the bandwidth was not an option. HIS had previously used a Microsoft ISA Server which delivers limited web caching functionality and, as it can only handle HTTP content, could not cache video, downloads, or updates. HIS recognised the need for a more powerful solution, focused on caching all web content.

Meeting the school’s requirements and budget

Jeff researched his options online and CACHEBOX quickly became the front-runner. “I contacted a few companies but they were slow to respond, which always makes me worried. If they are slow on sales, what happens when there is a problem and they already have your money?”

Having discussed the CACHEBOX range with ApplianSys and a local partner (Solution First), HIS decided that a CACHEBOX230 would best meet their requirements and budget.

“A number of factors made CACHEBOX the best choice for us,” Jeff explained. “The pricing was very competitive, the range presented us with options at different price/performance points to select from and there was technical support from ApplianSys and their local partner.”

Harare International School chose to deploy CACHEBOX using WCCP. Originally developed by Cisco, WCCP mode enables a router to separate out web traffic automatically and forward it transparently via CACHEBOX. Other switch/router vendors have implemented WCCP support in their products as it simplifies the redirection of web traffic. 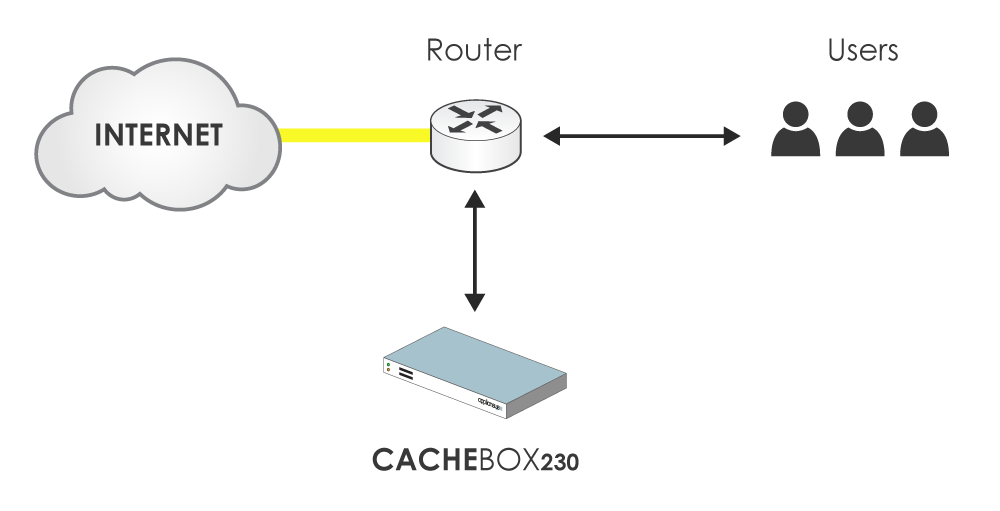 In addition to making their CACHEBOX deployment easy, WCCP also provides redundancy. If there is a problem with CACHEBOX, objects can be accessed from the internet without disruption.

A caching solution that pays for itself

Since deploying CACHEBOX HIS has benefited from significant bandwidth savings and performance improvements.

CACHEBOX has enabled the school to use internet based content during lessons, delivering a better learning experience for students. In particular, teachers are now able to use video content from various websites that was previously impractical. “Multiple students can gain access to sites that would normally have been too slow or inaccessible in the past,” confirms Jeff. “Commonly used websites no longer timeout and load almost instantly.”

“Even content that is not cached can be accessed faster due to the bandwidth saved by serving part of our traffic from CACHEBOX,” added Jeff. “Every aspect of our web-based traffic has improved significantly. The end-user experience is now much better than before and there are fewer support calls related to internet performance.”

CACHEBOX has delivered average daily savings of around 25% and achieves up to 70% at peak times. Internet access speeds during these peak times would previously have been painfully slow. Jeff reports that, “CACHEBOX has resulted in internet-based lessons that now run smoothly.”
There has also been a dramatic reduction in bandwidth consumption associated with updating software for all active devices throughout the campus. Updates from software vendors including Microsoft, Apple and Adobe are downloaded once when the first computer is updated. They can then be served from cache for subsequent devices.

Where bandwidth is particularly expensive, CACHEBOX very quickly pays for itself. HIS is a prime example of a rapid return on investment. Jeff told us, “We have not had to upgrade our Internet connection since we have gained 25% of ‘free’ bandwidth. We’ve saved around $3,000 per month at current Zimbabwe Internet prices.”