"We rolled out 1200 Chromebooks to classrooms and CACHEBOX means that we haven't needed to increase our bandwidth."
Rodney Leer, Brenham Independent School District, USA "ApplianSys is the only vendor that takes the time to look at our appliances for us, and it really goes a long way."
Mike Caruso, Orland Park Consolidated High School District 230, USA "Our bandwidth problems have been practically eliminated. Monitoring & customization is a snap with the web interface."
Desert Academy, Santa Fe, USA "CACHEBOX is a great product. We've been using it for years to help save bandwidth for our students."
Sergio Jacobo, IT Director, Calexico Mission Academy, USA "The ApplianSys solution has given us flexibility and control over our own filtering..."
Philip Pearce, Strategic Technical Manager, E2BN, UK

To support e-Learning UTC encourages internet use in the classroom and made plans to implement a Learning Management System (LMS) – called Smart English – with content from sites including YouTube and SoundCloud.

CACHEBOX – the ideal solution
Turning to his trusted DDI vendor, ApplianSys, he found they offered a caching solution that was schools-focused and affordable.

Eduardo decided to deploy a CACHEBOX230 to handle student traffic and offload demand on bandwidth. “Having happily used my DNSBOX solution for years, I was already familiar with the basic GUI and knew ApplianSys’ products are reliable and easy to use,” he says.

With CACHEBOX’s reporting, Eduardo gained advanced visibility of his network traffic, quickly learning that thousands of repeat requests for large software update files were the primary cause for network congestion.

Since deployment, CACHEBOX stores gigabytes of Microsoft, Apple and Chrome updates, and serves them locally. As a result, it has saved an average of 65-70% of UTC’s available bandwidth capacity, month after month. 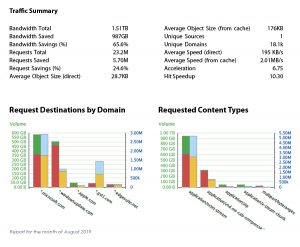 “One time, our network went down following a problem at our ISP’s end. I had to disconnect CACHEBOX and other equipment to get the ISP issue resolved. When it was fixed, I forgot to switch CACHEBOX back on – and that’s when I truly experienced how slow everything was – we were at 1Mbps connectivity at the time,” says Eduardo.

“But as soon as I switched CACHEBOX back on, I immediately saw a faster connection – between 35-50 Mbps. That’s when I realised how much more useable CACHEBOX makes the internet!”