"Our bandwidth problems have been practically eliminated. Monitoring & customization is a snap with the web interface."
Desert Academy, Santa Fe, USA "We rolled out 1200 Chromebooks to classrooms and CACHEBOX means that we haven't needed to increase our bandwidth."
Rodney Leer, Brenham Independent School District, USA "ApplianSys is the only vendor that takes the time to look at our appliances for us, and it really goes a long way."
Mike Caruso, Orland Park Consolidated High School District 230, USA "The deployment review allowed me to discuss my configuration and performance. I knew CACHEBOX was doing a great job but it's good to have expert confirmation."
Keith Stoeber Network Administrator, Sioux Central, USA "The DNSBOX does what it claims to do. The pre-sales and post-sales support is excellent. Original deployment was a pilot solution. It's now serving tens of thousands of users per day."
Jim Martin, Westfield (URW), UK

Established in 2009, the Outwood Grange Academies Trust (OGAT) was born out of the success of Outwood Grange, a large school of 2,200 students.  OGAT is a multi-academy trust (MAT) and currently comprises 19 academy schools. Of these, 3 are primary schools and 16 secondary.

Academies are independent state schools that are directly funded by the government. They provide greater freedom and flexibility to heads and teachers, promote innovation and diversity in the school system, and so help to raise educational standards across the board. Every academy is required to be part of an academy trust which is an exempt charity and company limited by guarantee.

The changing structure of Education in England

Historically, Local Education Authorities (LEAs) have provided schools with broadband.  Now, as many schools convert to academies, they have more freedom to take control of their own IT infrastructure and use more technology in the classroom.

As an Academy Trust, OGAT specialises in turning around underperforming schools. Director of ICT at OGAT, Stuart Jones, comments: “We provide our expertise and services to these schools. Our success is down to the way we deliver our curriculum – and a huge part of that is facilitated by technology in the classroom.”

Rather than simply reading from a textbook, teachers at OGAT use YouTube videos as visual aid to enhance students’ learning experience.

“Online tools like videos are more engaging to the student than just reading from a regular textbook. Teachers need to be more and more creative with their students to keep them engaged, and internet-based learning helps them do that,” says Stuart.

Out with the old, in with the New: OGAT’s IT refresh

Under LEA contracts, the schools were limited by how they could use internet in the classroom.  As an academy, OGAT now had the opportunity to do more with its broadband infrastructure.

“One of the biggest impact changes we can make to the school – to teaching and learning – is to change the broadband connection to one the school controls in its entirety, so that more online resources can be used in the classroom.”

In 2013, the trust decided to do just that. “That’s where my role was created,” says Stuart, “I was asked to design a blueprint, which would be rolled out to each academy as we carried out upgrade work to these academies.”

The need for high performance caching

Every academy classroom has desktop PCs, and networks at some sites also cater for a number of laptops and tablets.

“Caching was always in the back of our minds,” says Stuart, “The first of our schools to make a move to the new broadband connection was Outwood Grange with 2,200 students. We were very conscious that trying to connect 1,500 devices over broadband here would be impossible without caching.”

“Moreover, when you analyse what’s going on in the school, you realise that when teachers prepare lessons, they check out any content they need to use in front of the class beforehand. So, the obvious answer to us there was a caching solution.”

By fetching and storing online content in advance of a lesson, a caching appliance would be able to deliver requests for the content much faster, to any number of classroom devices.

Stuart therefore sought a caching solution and decided that CACHEBOX was an ideal fit.

Each of OGAT’s 19 academies has its own internet connection. The trust generally replaces connectivity at each academy when its LEA broadband contract expires.

The new connection and caching are usually in place prior to the old contract expiring. Once that date arrives, schools are simply switched over to the new broadband – often over a weekend.

Since 2013, eight sites have had a CACHEBOX deployed, along with their own broadband connection.

“Our other sites will receive the same solution once their LEA contracts expire,” says Stuart, “CACHEBOX is most definitely in our blueprint design!”

Stuart comments on the management of CACHEBOXes at each of the sites: “CACHEBOX needs very little configuration once deployed – it just sits there and does its job perfectly. You don’t have to reboot it, or tweak it to get the best out of it – it’s ready to go straight out of the box.  We just test the latest firmware, approve it for the trust and I give a nod to the Network Managers to apply it!”

Recently, the trust launched a pilot BYOD scheme at its Wakefield site, with plans to extend the scheme further in late 2016.

Stuart is happy with CACHEBOX’s ability to handle frequent Windows and anti-virus updates for devices joining the BYOD network: “90% of connected devices on BYOD are Apple, and CACHEBOX is delivering most of the requested content.”

”On the wifi network we’re seeing a weekly average traffic throughput of 300GB,  but in terms of what we’re pulling in from the internet, it’s only 150GB. CACHEBOX’s performance has been phenomenal.” 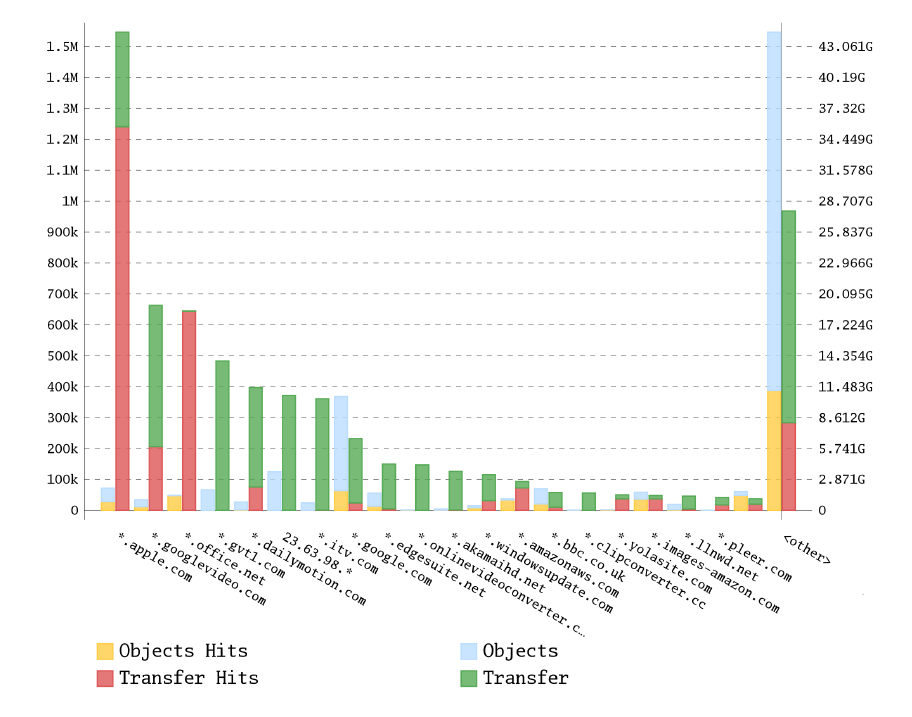 “We’ve got all the CDNs turned on. It does a great job of caching what people visit,” he says.

Asked what his favourite CACHEBOX feature is, Stuart comments: “Reporting – it gives us very clear indication of what traffic is doing – where we get biggest hits and where we can get the biggest savings.”

Having deployed the new broadband and CACHEBOXes, Stuart is confident that OGAT’s network is in a strong position to handle growing internet demands, such as the planned roll-out of BYOD.

Commenting on network reliability, he says: “If you asked a member of staff when we last had an outage that wasn’t planned, they wouldn’t be able to tell you – whereas this used to be a very common occurrence under the local authority. That reliability of service helps drive us towards being more internet-based.”