"With
Chris Zappe, Technology Director, Desert Academy, USA "DNSBOX allowed us to build a best-practice split DNS architecture in an affordable way."
Harmohan Sood, Reach Internet Ltd, UK "CACHEBOX is a really solid product that helped us a lot with managing our bandwidth usage"
Ashik Haripersadh, IT Director, The Ridge School, South Africa "When you are connected on a satellite link you have to make the most of everything you have - CACHEBOX does that job."
Mark Iten, Network Manager, OTZ Telephone Co-Operative, USA "CACHEBOX makes a really noticeable difference to speeding up educational sites in the classroom - accessing more digital content faster"
Chris Rule, Technology Director, Sublette County School District #1 USA

The Calgary Science School (CSS) is a Canadian public charter school in Calgary, Alberta; which teaches grades four through to nine. The school’s network supports the IT and web requirements of over 600 students and teachers.

CSS maintains a 1:1 student to computer ratio; all students are given their own laptop computers to use as a learning tool both in class and at home. More recently, since receiving a governmental ‘Emerging Technologies’ grant, CSS has been issuing new students with Apple IPads. 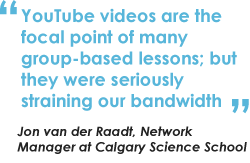 The problem was that internet speeds during lessons were becoming very slow, impacting the productivity of students and teachers.

According to Jon van der Raadt, the schools Network and Technical Manager, “YouTube videos are the focal point of many group-based lessons; a full class of students simultaneously attempting to access the same content was causing strain on our bandwidth and seriously impacting network performance.”

As the number of devices has increased following the 1:1 scheme, IOS app store downloads and other software updates now make up a large proportion of the school’s traffic. “With such limited bandwidth and poor network performance we couldn’t do any core software upgrades during school hours: this caused an unnecessary headache and saw us having to work outside normal school hours.”

Calgary Science School sought a caching solution that would alleviate the bandwidth strain by effectively caching the content that was creating the most problems.

Having looked at multiple solutions online, the school decided to purchase a CACHEBOX230. CACHEBOX’s ability to handle video content and software updates was particularly attractive. “We went with CACHEBOX for a number of reasons: the people at Appliansys understand the needs of those working in education, the solution offers high performance for a reasonable price and is backed by quality service,” explains Jon.

In the past, Calgary Science School struggled with software updates. CACHEBOX’s inbuilt pre-caching functionality allows these updates to be fetched overnight when traffic is low. This means that updates no-longer slow down internet access for other users during peak traffic times.
ApplianSys Support Engineer Nick Fennell explains: “By setting the CACHEBOX to visit software download pages and cache the content it finds there, software updates will be available locally whenever users need them.” 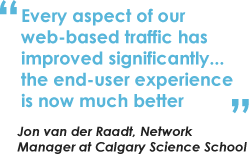 Calgary Science School will also benefit from CACHEBOX’s ability to effectively handle large content such as video. “Video sharing sites like YouTube deliver flash videos over HTTP. This service consumes large quantities of bandwidth, and slows things down for users. Although caching is the obvious solution, many ‘unintelligent caches’ run into problems. Video sharing websites store the same content at multiple URLs. This confuses many caching solutions into treating each URL as unique content. In addition, websites like YouTube often change the rules for presenting their content so that caching no longer works. At Appliansys we constantly monitor these changes and re-engineer our solutions to cope with them.” comments Nick.

A caching solution that really performs

Since deploying CACHEBOX, CSS has benefited from significant performance improvements and bandwidth savings.

CACHEBOX has enabled the school to use internet based content during lessons, delivering a better learning experience for students. In particular, teachers are now able to use video content from various websites without worrying about classroom delays.

“Even un-cacheable content can be accessed faster due to the bandwidth saved by serving part of our traffic from CACHEBOX,” reports Jon. “Every aspect of our web-based traffic has improved significantly. The end-user experience is now much better than before and there are fewer support calls related to internet performance.”

CACHEBOX has delivered average daily bandwidth savings of around 42% and generated a speed increase of up to 66% at peak times. There have also been dramatic improvements in bandwidth savings associated with updating software for all active devices throughout the school. Updates from software vendors such as Apple and Microsoft are now only downloaded the first time they are requested. They can then be served from cache for subsequent requests.

CSS is pleased with the solution it has in place, and on top of this, Jon is confident he can rely on ApplianSys for support in future. “It is reassuring to know that the support team are there; they were very responsive to my questions during deployment. Since then they have been in touch to see how things are going. It’s good to know that they be called upon to help me solve future problems.”