"ApplianSys is the only vendor that takes the time to look at our appliances for us, and it really goes a long way."
Mike Caruso, Orland Park Consolidated High School District 230, USA "We rolled out 1200 Chromebooks to classrooms and CACHEBOX means that we haven't needed to increase our bandwidth."
Rodney Leer, Brenham Independent School District, USA "Our bandwidth problems have been practically eliminated. Monitoring & customization is a snap with the web interface."
Desert Academy, Santa Fe, USA "We don’t pay for bandwidth, so we need performance. CACHEBOX really helped us with our updates and speed"
Dale Moeller, Rutland Independent School District 39-4, USA "We have been very pleased with CACHEBOX so far. Once we got it configured, it's been doing a very nice job"
Marc Stakey, Bellefontaine School District, USA

Launched in 1997, Karib Cable Kelcom International Ltd trading as Karib Cable is a leading provider of cable, broadband internet and fixed line telephony services in the Caribbean. Originally serving Kingstown, St Vincent and the islands of the Grenadines, it now also serves customers in St Lucia and Antigua.

Challenge
As the countries Karib Cable serves are islands in the Caribbean, bringing the World Wide Web to them is a difficult and expensive challenge. In particular Internet video was becoming a serious strain on Karib Cable’s bandwidth. It wanted a way to improve its bandwidth use so it could add more subscribers to its services whilst at the same time increasing speeds for its existing customers.

Growth in its customer base and demand for high speed broadband packages led Karib Cable to increase bandwidth periodically.

The downside to giving customers faster internet was a sudden increase in internet video traffic.  Video content from sites like YouTube started accounting for over 40% of all http traffic.

“Our investment in an expensive bandwidth upgrade was at risk”, explains Dale Pompey, IT  Manager at Karib Cable. “Our new capacity was being wasted and stopping us adding new subscribers, which was one of the main reasons for buying more bandwidth.”

Caching content locally was an obvious answer. So, Dale and his team looked at a number of options, including using Squid web caching software on Linux servers and commercial caching appliances.  Without time consuming configuration work, these options wouldn’t deliver enough performance and most commercial caching appliances were too expensive.  Dale felt he would end up paying extra for features that weren’t relevant to an ISP.

Solution
Karib Cable deployed two CACHEBOX230 units at its data centres on Saint Lucia and one CACHEBOX200 on St Vincent.  ApplianSys worked with the IT Manager to tailor the server appliances for his video load.

Karib Cable was introduced to the ApplianSys CACHEBOX range by London based system integrator, Metropolitan Networks. They purchased two CACHEBOX230 units which they deployed as transparent proxies with IP spoofing enabled at their data centre on St Lucia and one CACHEBOX200 at the data centre onSt Vincent.

To provide core performance for their network, in 2012 Karib Cable decided to deploy three CACHEBOX310 units. 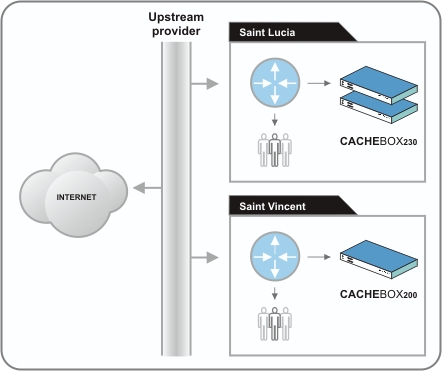 CACHEBOX, itself a Squid based appliance, incorporates over eight years of ApplianSys expertise performance tuning Squid for network cores.  Its easy to use interface takes away the headache of configuring and managing Squid, so Network Managers’ can focus on more important tasks.  The new video caching feature on CACHEBOX was especially useful to Dale.

Traditional caching servers store content based on the full URL.  They only serve an object from cache if it is requested from the same backend server it was originally requested from. In recent years most sites serving large files such as video have started using Content Distribution Networks (CDN’s), which have lots of backend severs spread out across the world. This leads to a low hit ratio (i.e. amount of bandwidth saved) because the cache thinks they are different files and its storage quickly fills up with duplicate files.

CACHEBOX solves the problem with custom video caching extensions to Squid especially for CDN’s.  It can locate and serve a file from its cache even if it is requested from a server other than the original one. This dramatically improves online video caching as well as other large files, like software updates.

“Since installing CACHEBOX we’ve seen tremendous benefits,” says Dale.  “We regularly get hit rates of 40% and with large object caching picking up the web videos, we’ve been adding a lot more subscribers to our network.”

“I speak to a lot of vendors from the US, South America  Europe and even Asia,” continues Dale, “but the quality of support I get from the guys at ApplianSys is amongst the best.  Their caching expertise and commitment to customers really shows.”