"ApplianSys is the only vendor that takes the time to look at our appliances for us, and it really goes a long way."
Mike Caruso, Orland Park Consolidated High School District 230, USA "Our bandwidth problems have been practically eliminated. Monitoring & customization is a snap with the web interface."
Desert Academy, Santa Fe, USA "We rolled out 1200 Chromebooks to classrooms and CACHEBOX means that we haven't needed to increase our bandwidth."
Rodney Leer, Brenham Independent School District, USA "ApplianSys employees are the best at their jobs and we never had any issues with them..."
Firas F. AL-Saidi, IT Director, Al-Bayan Bilingual School Kuwait "DNSBOX’s in-built monitoring system shows physical device health and gives a clear picture of logical resources utilization."
Samson Oduor, Access Kenya, Kenya

Founded in 1898, Anaheim Union High School District (AUHSD), California, has a student population of approximately 31,000, making it one of the largest school districts in the state. The District covers 46 square miles and stretches across the cities of Anaheim, Cypress, Buena Park, La Palma and Stanton.

In the US, it is common for individual schools in a district to connect to each-other via a Wide Area Network. This makes it easier to share resources from lesson plans to Student Information Systems across the district.

There is a significant drawback to this approach. Any problem with the internet connection or a sudden surge in demand from any one school is suffered by students and teachers at every school on the WAN. This was the situation at Anaheim Union High School District (AUHSD) where a 1Gbps internet connection at the high school was shared by 19 schools in the district.

These schools connected to a 10Gbps fibre ring which could comfortably support traffic between sites. But the high school’s internet connection was a bottleneck, prone to oversaturation with frustrating consequences in the classroom.

CACHEBOX Sales Consultant for US Schools Sophie Clark explains: “Teachers want to direct students to online educational content at the start of a lesson, but often abandon their lesson plans when students try to simultaneously access content and the network grinds to a halt. Over a school year, disruptions like this can add up to days of teaching time lost.” 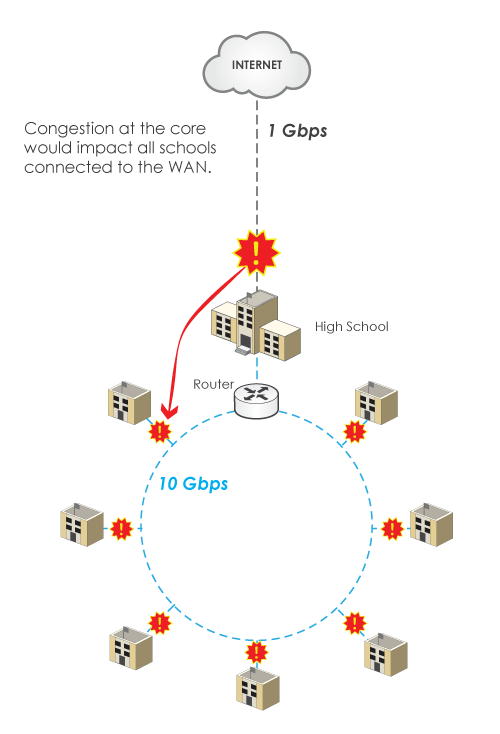 The problem was set to get worse: AUHSD anticipated an “increased use of technology in instruction, online assessments and the general trend toward hosted, enterprise systems with richer content”. The district had invested in around 22,000 devices for students to use in classrooms and dedicated computer labs; it needed to be sure the network could cope with the inevitable growth in traffic.

Congestion is the problem…

As well as demand placed on the internet connection when students actively use their devices, the network needs to cater for frequent updates to Operating Systems, Antivirus and other software on the devices themselves. These large files are requested automatically by the devices, often simultaneously as soon as software vendors make an update available. When up to 22,000 devices each request a copy of these files from the internet, congestion is inevitable.

If 500 devices connect to the internet via Anaheim’s 1Gbps link to request a 500Mb windows update file, it’s possible that these may download in under 5 minutes if:

In these ‘perfect’ conditions, 1000 devices may clear in 10 minutes. But with tens of thousands of requests, download connections will need to remain open far longer, causing high congestion on the shared WAN link. At these times, students and teachers would find internet access in the classroom slow – sometimes unusable.

For Anaheim, and any large school district operating a 1 device to 1 student (1:1) scheme, upgrading internet connection capacity to 1Gbps, 2Gbps, even 10Gbps (beyond the technology budget of many school districts) would only partially mitigate this congestion problem. Many schools upgrade connections annually but, like Anaheim, have never been in a position where they have sufficient bandwidth to meet student and teacher demand. 1Gbps is many magnitudes more capacity than schools enjoyed just 5 years ago. With plans to introduce another 10,000 devices, Anaheim could see that it needed much more than a bigger pipe.

Clearing congestion caused by software updates is only part of the story. Schools districts like Anaheim invest in connectivity and devices to improve student learning outcomes with:

These tools can only deliver the advantages of technology-enabled classrooms if they can be accessed at high speed. Engaging content loses impact when students wait for video buffering.  Teachers will stop using a LOR if the system is too slow or keeps ‘timing out’.

Fast access to the content that matters in the classroom isn’t something that big connections alone can deliver. The internet connection is only the last mile of a long path that web content travels to reach students’ devices. The rest is of the journey is not within a district’s control: it doesn’t matter how much free capacity a last-mile internet connection has if the content needs to traverse congested routes before it gets there.

… and caching is the solution

Any time that content is requested from the internet, a web caching device can store a copy to serve the next request(s) from within the LAN. So the web content only needs to travel down your fast network: students web requests are served at LAN speed.

So when tens of thousands of devices request the same software update file, it’s only downloaded once, leaving the internet connection free for educational content. And when a teacher directs a class full of students to watch a video on their devices, the first request is served as fast as the internet is able. Future requests can then be served at LAN speed, which is typically orders of magnitude faster than the WAN or internet. Crucially, classrooms in other schools in the district are not competing for the same capacity on the internet connection.

Technicians at AUHSD were aware of the benefits of web caching.  They reviewed Bluecoat’s appliance some years ago but found it didn’t support caching for the content that was important to them.  Anaheim Union specifically needed a solution that would:

The district wanted to see what caching vendors could now offer them, and published an RFP:

“The District sees the implementation of web caching as an important component in planning next steps. The District is looking to implement a web caching solution to leverage capacity resources and mitigate costs.”

It planned to upgrade its connection to 2Gbps at the same time as deploying a web cache and it expected to purchase even bigger connections in coming years to meet an anticipated 10% annual growth in network traffic. It needed a solution that would scale with this requirement.

Designed with schools for schools, CACHEBOX closely fits Anaheim’s requirements. With deployments in hundreds of US school districts and many more globally, ApplianSys engineers focus more resource on the needs of this sector than ISP or enterprise focused caching vendors.

CACHEBOX caters well for the educational content that matters to teachers including Pearson SuccessMaker and SmartyAnts. Specially developed features like pre-caching allow teachers to request content for caching before lessons start, so that even the first student to download a file gets it at LAN speed.

Crucially, CACHEBOX is able to cache content delivered via HTTPS in school environments without compromising privacy or security. CACHEBOX’s intuitive user interface put simple controls at a network administrator’s fingertips, making it easy to configure how HTTPS content is handled.

Anaheim purchased 4 CACHEBOX420s to deploy in a cluster at the high-school. By using WCCP protocol on their Cisco routers, traffic can be distributed between the units efficiently. With 1 Gigabit Ethernet Network Interface Controllers (1GigE NICs) as standard and support for 10GigE, CACHEBOX420 has the connectivity to support the district’s anticipated growth. And whilst the units feature enough processing power to handle a little over 1Gbps of traffic each, together they support several times Anaheim’s current load and can comfortably deal with the district’s anticipated growth. 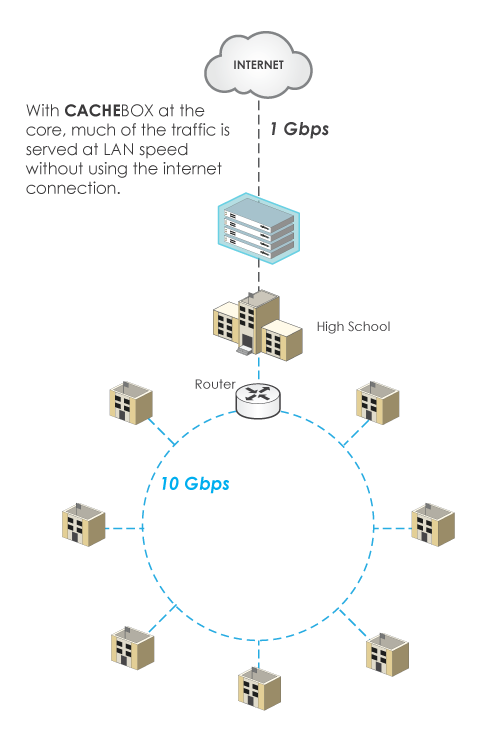 The US Federal Communications Commission (FCC) has recognised the role that caching can play in getting good value from investments in connectivity. It has made funding available for schools to purchase a cache on its Universal Service scheme, commonly known as E-rate.

Anaheim had considered using E-rate funding to cover part of the cost of caching. However, it found CACHEBOX to be so affordable that it had room within existing technology budgets to purchase the units.

CACHEBOX quickly delivered savings. The following report graph shows that of 12.6TB of requests for Windows Update files in June 2016, over 12.1TB were served by CACHEBOX. 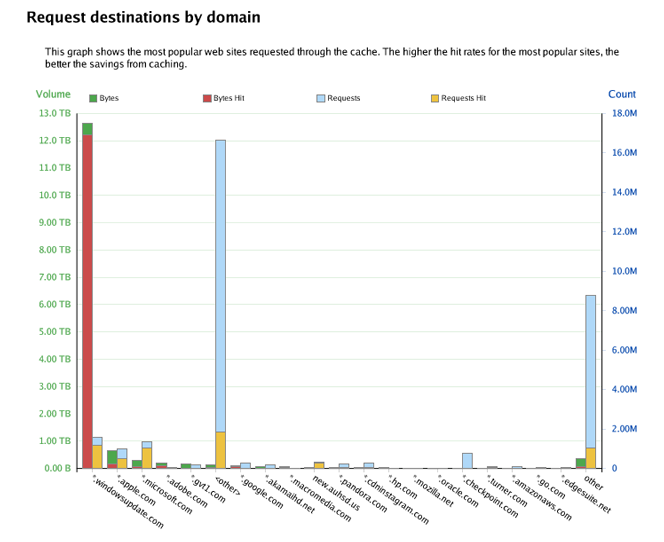 With caching taking a large proportion of traffic off its internet connection, Anaheim can plan future capacity investments with more emphasis on improving routine performance than dealing with extreme peaks. 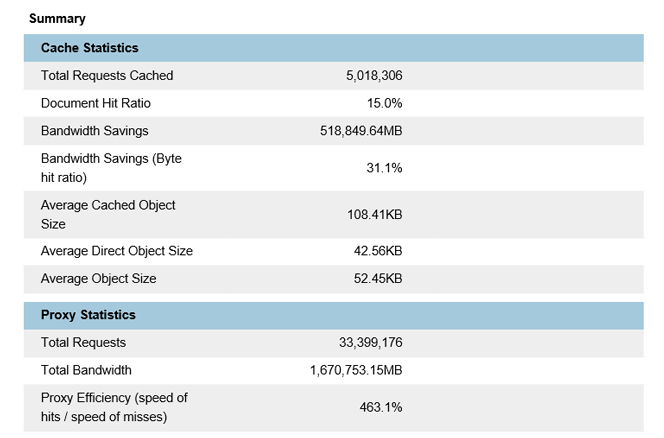 Whether you operate a large district-spanning WAN or a single school LAN, the caching principle scales well. Students use the same devices, running the same software and their teachers direct them to specific content, so there is a high volume of repeat requests even in smaller schools. CACHEBOX means that you don’t need to buy enough bandwidth to cater for duplicated traffic and it delivers content to students faster than your connection ever could.